Join Us On Social Network For Fast Updates Of GK,Model Papers,Current Affairs : Click On Below Links :

India and Afghanistan are set to operationalize their first air-freight corridor in the coming days. The first flight will be operated by Ariana Afghan Airlines, which is the Afghanistan’s national carrier. The flight which will initially operate once or twice in a month will carry commodities to and from Delhi. Depending upon the supply needs, the frequency of the flight will be increased. 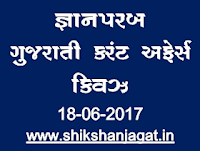 The World’s largest festival of light, music and ideas, Vivid Sydney has entered into Guinness World Book of Records. The Guinness World Record have given the Vivid Sydney installation Dreamscape the title for the ‘Largest interactive lighting display’.

Mission officials for NASA’s James Webb Space Telescope (JWST) have announced the initial science targets for the James Webb Space Telescope. The JWST has been scheduled to look at a large number of things in the universe including icy moons, distant exoplanets and galaxy clusters. It will look at very first galaxies after the Big Bang, search for fingerprints of life on Enceladus, Europa, and exoplanets like TRAPPIST-1e etc. As a part of the initial observations, 2100 observations has been planned for the JWST by the mission handlers.

External Affairs Minister Sushma Swaraj has inaugurated Know India Programme (KIP) for NRI and PIO youth with a view to provide them with an exposure to the country of their origin so that they can understand India better and more closely. External Affairs Minister has also launched a portal for the Know India Programme (KIP).
Download Current Affairs Quiz Date 18-06-2017
Tag : Current Affairs