Geologists for the first time have discovered 152 million-year-old fossil of Ichthyosaur, an extinct marine reptile in in Kutch desert region of Gujarat.

The Infantry Day in observed every year in India on 27 October to commemorate supreme sacrifices made by Indian Army’s infantry against Pakistan in Jammu and kashmir in 1947.

The World Day for Audiovisual Heritage (WDAH) is observed every year on October 27 to raise of awareness of significance of and preservation risks recorded sound and audiovisual documents (films, sound and video recordings, television and radio programmes).

The Rajasthan Assembly passed Backward Classes (Reservation of Seats in Educational Institutions in State and of Appointment and Posts in Services under State) Bill, 2017 by voice vote. 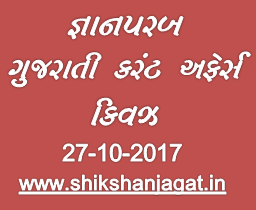 The International Conference of heads of Metrology Institutes held in Sevres, France has decided that the measure of kilogram will no longer be peggedto cylinder. From 2019 onwards, it will be set by value of Planck constant in combination with definitions of meter and second.

Scientists from The Broad Institute and Massachusetts Institute of Technology in US have developed RNA Editing for Programmable A to I Replacement (REPAIR), a new gene editing tool therapies that can reverse disease-causing mutations in humans.

The Union Ministry of Tourism gave Letters of Intent (LoI) to seven shortlisted companies for adopting 14 monuments under Adopt a Heritage Scheme at the closing ceremony of ‘Paryatan Parv’ held in New Delhi.