Gujarat, as a state of India follows Parliamentary system of government similar to other states. The Government is responsible to the Legislative Assembly and stays in power only if it has the support of majority members. Elections take place on a first past the post basis, the candidate with the most number of votes wins the seat regardless of absolute majority. Every citizen of the state, who is 18 and above is eligible to vote. The Governors of States of India then invites the leader of the largest party or coalition to form the government. The Constitution of India states that the term of Legislative Assemblies is five years. As is common in most other first past the post electoral systems, the state's politics are dominated by two parties - the Indian National Congress (INC) and the Bharatiya Janata Party (BJP).

The term of current Gujarat Legislative Assembly ends on 22 January 2018. The previous assembly election, held in 2012 resulted in BJP gaining a majority of seats and Narendra Modi becoming the Chief Minister. After the 2014 General Elections, Modi became the Prime Minister of the country and Anandiben Patel was appointed the Chief Minister of Gujarat. After the agitations of Patidars, Dalit protests and claims of poor governance, she was replaced by Vijay Rupani as the Chief Minister by the party. 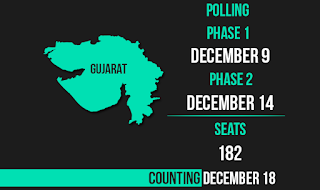