The Union Ministry of Tourism gave Letters of Intent (LoI) to seven shortlisted companies for adopting 14 monuments under Adopt a Heritage Scheme at the closing ceremony of ‘Paryatan Parv’ held in New Delhi.

The Rajasthan Assembly passed Backward Classes (Reservation of Seats in Educational Institutions in State and of Appointment and Posts in Services under State) Bill, 2017 by voice vote.

Sri Lanka has signed Memorandum of Understanding (MoU) with India to build 1,200 houses in strategically located southern port city of Hambantota. Of the 1,200 houses to be built, 600 will be constructed in Southern Province, while remaining will be built across Sri Lanka, through one model village in each of country’s 25 districts.

Scientists from The Broad Institute and Massachusetts Institute of Technology in US have developed RNA Editing for Programmable A to I Replacement (REPAIR), a new gene editing tool therapies that can reverse disease-causing mutations in humans. 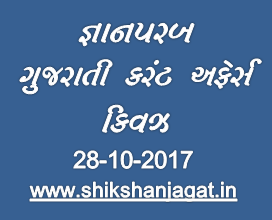 The First International Consumer Protection Conference on empowering consumers in new markets for South, South East and East Asian Countries was held in New Delhi from 26 to 27 October 2017. The theme of the conference was “Empowering Consumers in New Markets”. It was inaugurated by Prime Minister Modi.